“Magic Mushrooms” for Psychotherapy—What Does the Evidence Say?

What are “Magic Mushrooms”?

“Magic mushrooms,” also known as “shrooms” among many other names, are mushrooms containing the hallucinogen psilocybin. This compound is found in over 200 types of mushrooms and works, at least partially, by binding to certain serotonin receptors subtypes, especially in the prefrontal cortex. Other potential mechanisms of action include increases in glial cell line-derived neurotrophic factor and brain-derived neurotrophic factor, and mediation of changes in pyramidal cell dendritic spine organization.

Psilocybin does not always cause traditional visual or auditory hallucinations. Instead, it may distort how some users perceive objects and people already in their environment. Although the hallucinogenic effects typically last 4-6 hours, some people may experience changes in sensory perception and thought patterns for several days, weeks, or months! Further, the effects depend on the quantity, type, and form of shrooms consumed (i.e. dried or fresh), as well as the environment, past experiences, and expectations of the user.

Psilocybin was first isolated in 1957 and synthetically produced one year later. The new drug was named Indocybin and marketed for psychotherapeutic use in the 1960s. However, abuse and misuse of Indocybin resulted in psilocybin being classified as a Schedule I drug, similar to marijuana, heroin, and ecstasy. Consequently, Sandoz discontinued production, effectively putting a halt to any R&D efforts involving psilocybin.

Fast forward almost 40 years, a research group from the University of Arizona started the first psilocybin study in patients with obsessive compulsive disorder (OCD) in 2001. As of 2018, 18 clinical trials with psilocybin have been completed, with 21 more underway. Similar to marijuana, some US states or cities are now advocating for decriminalization of psilocybin. Moving it from Schedule I to Schedule IV (substances with “low potential for abuse and low risk of dependence” such as Xanax, Valium, and Ambien) would affect not only recreational users but also facilitate clinical research on this substance. 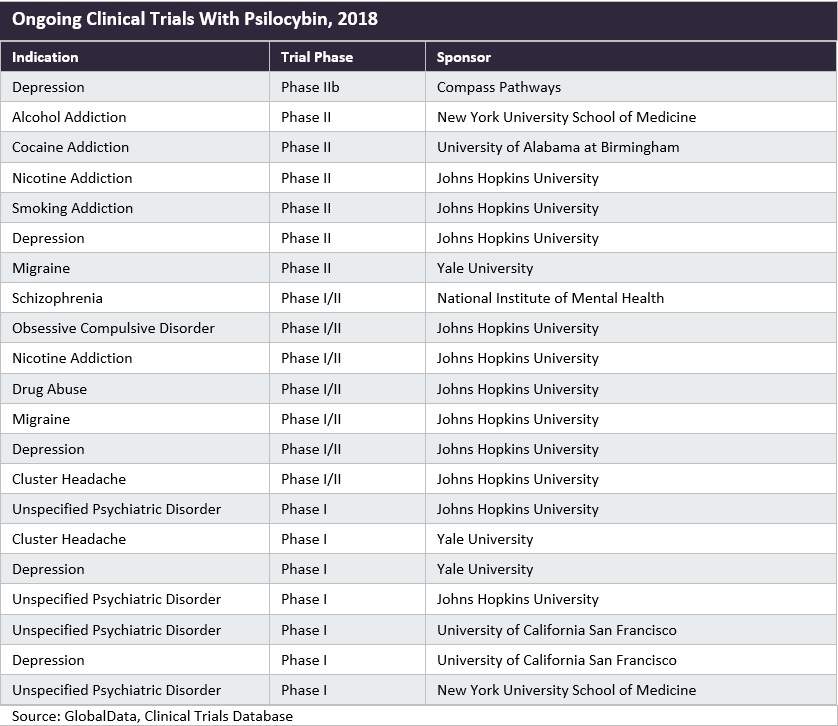 As summarized in the above table, psilocybin shows promise for various neurological and psychological conditions, including depression, anxiety, addiction, and headaches/migraine. However, to date, most trials have been small Phase I/II trials. Among the ongoing studies, COMPASS Pathways’ Phase IIb trial in patients with treatment-resistant depression is the largest and most advance. In fact, the company has received breakthrough therapy designation from the US FDA for psilocybin therapy for this purpose. This study includes 216 patients across Europe and North America and a Phase III study is set to follow should it be successful.

Pharmacological treatment for depression can be challenging for multiple reasons, including the fact that some depression types are treatment-resistant. Further, many existing antidepressants come with varying degrees of side effects such as indifference or apathy. Preliminary studies on psilocybin suggest that it may be useful for the treatment of depression while avoiding these side effects.

In a 2018 open-label study by Roseman et al. published in Neuropharmacology, 20 patients with moderate-to-severe treatment-resistant depression underwent two separate dosing sessions with psilocybin in combination with psychological support. Functional magnetic resonance imaging (fMRI) scans were conducted one week before the first and one day after the last session. In particular, the authors examined the amygdala responses to neutral, fearful, and happy faces. Overall, the results showed quick and long-lasting improvements in depressive symptoms after psilocybin treatment. Further, psilocybin with psychological support associated with increased amygdala responses to emotional stimuli, in contrast to previous findings with SSRIs. This finding suggests that, while SSRIs mitigate negative emotions, psilocybin conversely allows patients to confront and work through them.

However, the authors also cautioned that the findings should be interpreted with caution, considering the small sample size and lack of control group. 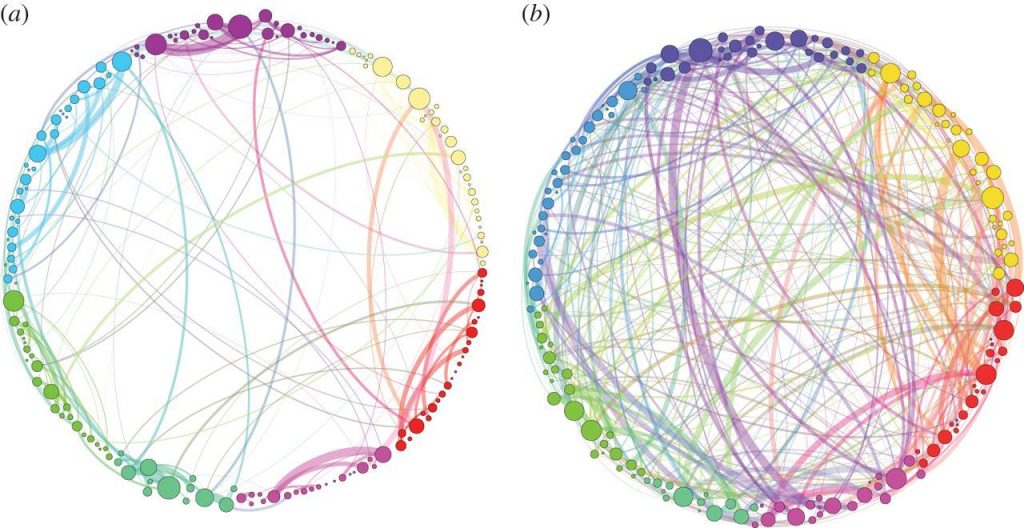 Other small clinical trials have shown effectiveness of psilocybin for depression and anxiety (and thus palliative care) in patients with life-threatening or end-stage cancer. For example, two studies published in the Journal of Psychopharmacology in 2016 (Ross et al. and Griffiths et al.) revealed that, together with psychotherapy, psilocybin produced quick, robust, and long-lasting (over 6 months!) anxiolytic and antidepressant effects in these patients. This was accompanied by sustained improvements in well-being and quality of life in most patients. Both studies concluded that these effects were mediated by psilocybin-induced “mystical experiences” on the session day(s). Yet another study by Roseman et al. (2017) supported these findings and further confirmed that the long-term therapeutic effects of magic mushrooms relates to the quality of the acute psychedelic experience.

Taken together, these are remarkable findings, considering that most antidepressants currently on the market can take days, or even several weeks, to show effects. Nonetheless, these were small studies, and the results will need confirmation in larger samples.

Importantly, patients with depression should not try to self-medicate with magic mushrooms. In particular, it should be noted that, in all studies on psilocybin for depression, it was not used in isolation. Rather, psilocybin should be seen as a tool for use in conjunction with traditional therapy to help people address underlying issues. Usually, a trained psychiatrist or therapist is in the room with the patient when they take the drug. They will then talk through the patient’s experience to help them push through any anxiety-provoking thoughts and sensations. In other words, the drug is enhancing the relationship between the therapist and the patient rather than acting as a stand-alone treatment.

Preliminary studies have moreover shown promise of psilocybin for smoking cessation. For example, an open-label pilot study by Johnson et al. (2014) found that moderate and high doses of psilocybin within a structured 15-week smoking cessation treatment protocol resulted in successful cessation (defined as seven-day point prevalence abstinence at the 6-month follow-up) in 80% of participants. This rate thus substantially exceeds the rates commonly reported for other behavioral and/or pharmacological therapies (<35%). Although we need confirmation from randomized trials to confirm these findings, this indicates that psilocybin may be an effective adjunct to current smoking cessation treatments.

In a 2018 study by the same group, semi-structured interviews were conducted with 12 of 15 participants an average of 30 months after the initial psilocybin sessions. Interestingly, the participants reported gaining vivid insights into self-identity and reasons for smoking as a result of their psilocybin sessions. These insights and experiences, as well as other positive personality changes, persisted beyond the immediate drug effects and – according to the participants – overshadowed any short-term withdrawal symptoms.

In addition to clinical trials with psilocybin, a retrospective survey on naturalistic psychedelics (including magic mushrooms) similarly found that, among 358 individuals who quit or reduced smoking after ingesting a psychedelic in a non-laboratory setting >1 year ago, 38% reported continuous smoking cessation. Hence, the authors concluded that psychedelics seem promising in treating tobacco addiction via spiritual experience, changes in priorities/values, and improvements in emotional regulation.

A 2015 proof-of-concept study quantifying the acute effects of psilocybin in 10 participants with alcohol dependence, in combination with motivational enhancement therapy, found a significant increase in the rate of abstinence following psilocybin administration (4 weeks into the study). These gains were largely maintained during the 36-week follow-up. Similar to the findings for depression, the intensity of effects in the first psilocybin session was also a strong predictor of changes in drinking habits in the first 3 weeks after psilocybin administration. These results are encouraging and, as the authors concluded, warrant further trials in larger populations.

What Does the Future Hold for Magic Mushrooms?

The clinical trial results described above are certainly very promising, and experts around the world agree that it is (finally) time to start taking psilocybin research seriously. However, for psilocybin to become widely used for psychotherapy, large Phase III trials confirming its efficacy and safety are needed. Such trials are expensive and, considering that psilocybin is still listed as a restrictive controlled substance by the FDA, difficult to gain approval for. Nevertheless, the potential effects of psilocybin on depression, anxiety, and palliative care may make it well worthwhile for research groups and study sponsors to persist and work together to overcome these barriers. Other mental conditions, including OCD and eating disorders, are also worth examining more closely.

Further, there is likewise a need for real-world evidence on the effects and safety of recreational use and self-medication with magic mushrooms, including on differences according to specific mushrooms and the mode of consumption.

How Impetus Can Help

The Impetus InSite Platform® is ideal for study sponsors and research groups at different sites to collaborate. Using its interactive discussion forum (InSite Exchange™), stakeholders can effectively and securely discuss research needs, progress to date, or next steps. Moreover, the platform’s asynchronous annotation tool is an effective way of co-creating documents with key stakeholders throughout the world, including study protocols, manuscripts for publication, and regulatory dossiers. With best-in-class collaboration tools, the secure and compliant platform allows easy sharing of data among all relevant parties.

Whether your goal is to conduct an international, multi-center clinical trial; establish a real-world evidence study protocol; determine the best ways to disseminate information on psilocybin to payers and regulators; or any other related issue, Impetus can help!

Brodwin, E. (2018). People feel more connected to the world around them after a psychedelic trip — and it could have profound implications. Business Insider. Retreived from https://www.businessinsider.com/psychedelics-trip-therapy-2018-1

Cassella, C. (2019). ‘Magic Mushrooms’ May Soon Be Decriminalised in Parts of The US. Science Alert. Retrieved from https://www.sciencealert.com/magic-mushrooms-may-soon-be-decriminalised-in-some-us-states?fbclid=IwAR31Vmbtf5cAszDS4um557St9JJ7Z-iOrTsB20pKd0RDKG0OZEqIBAdX7Mc

Davis, K. (2019). What are magic mushrooms and psilocybin? MedicalNewsToday. Retrieved from https://www.medicalnewstoday.com/articles/308850.php?utm_source=TrendMD&utm_medium=cpc&utm_campaign=Medical_News_Today_TrendMD_1

GlobalData Healthcare. (2018). The renaissance of psilocybin as a viable treatment option. Pharmaceutical Technology. Retreived from https://www.pharmaceutical-technology.com/comment/renaissance-psilocybin-viable-treatment-option/